How to Find Us

The Dragons on the Hill Roleplaying Club was founded in 1983(ish). It was at a pub that legend has it was called The Fox on the Hill in Peckham in SE london. The original members numbering about 20 consisted of groups of tabletop roleplayers, live action roleplayers and tabletop wargamers. At that time the pub charged for the use of the room and subscriptions of 50 pence a week were collected by the club treasurer.

Following some in-depth and Cthulhu-like investigative researching by Neil Blumfield, further history of the Dragons on the Hill RPG Club has been uncovered! 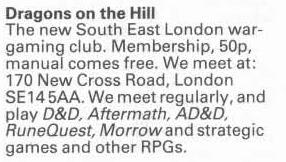 The club appears in the classified section of White Dwarf, Issue 42, June 1983. This gives the location as 170 New Cross Road which is in the Peckham area, but it is not a pub! Click the image of the advert to see a Google Streetview of the Dragons on the Hill birth place.

In 1986 a new (and more importantly free) venue was found at The Leather Exchange pub in Leather Market Street near to the Elephant and Castle Tube Station in South London and the Club moved there. It was at this time that Mark Shorey, the Club's longest serving club secretary, now departed to Guernsey (2006), joined the club. The Leather Exchange was cheap, sold cheap beer had an empty room with a stage and was empty in the evening and so was the perfect venue for 8 years. There was talk of changing the club name to Dragons in the Pub or Dragons in Leather to reflect our new location.

In 1991 The pub changed to new management after making a loss for several years. The Leather Exchange was taken over by More Balls R Us (the juggling company) remodelled and refurbished. The upstairs stage room was busy all the time, the price of beer went up, and all the chairs were bolted to the floor: no use to roleplayers.

In 1994 we went scouting for a new venue and settled on The Castle pub near to Chancery Lane in Central London. The Castle Pub fitted all the requirements of the dotH roleplaying club: it had an empty room and it was free to meet there. The beer was still expensive with central London prices.

During 1993 and 1994 club members drifted away and in 1994 the live action roleplaying group split off leaving only 6 people to continue the Club.

In 1996 we found that the Castle was becoming too popular in the evenings and the room where we met was busy too often. Our intrepid chairman went scouting for a new venue near to the Castle and found The King of Diamonds (now called The Argyle). It again had the main requirement of a free room (a downstairs function room) and not too busy on Wednesday evenings. We also went on a major recruitment drive trying to drum up new members so that we could play more than one game in the evening and to give us more of a choice of games during the club meetings.

We commissioned one of our members to draw us the dragon you see to the left (we bought him a pint!) and we put advertisements local gaming shops and in any periodical which would accept our ad. (particularly Arcane) We also put adverts into web sites and the uk.games.roleplay newsgroup.

Membership increased to about 20 once more and we were able to field three games during a club meeting or, with a full turn out, up to five games. We were valued regulars on a Wednesday evening by drinking our weight in beer in order to justify our free use of the function room!

Our next move (in June 2002) was to The Printers Devil Pub (now closed), since the King of Diamonds was to be refurbished and we no longer had access to their basement room. Nearly everyone preferred the new venue upstairs at the Printers Devil and the pizza that was often served there. The membership now stood at around 35.

After the Printers Devil became earmarked for flats the club sought another refuge in the form of The Kings Stores, August 2006, on Widegate Street near Liverpool Street Station. A reasonable selection of beer, a good-sized upper floor function room and decent food all made for a pleasant gaming environment. Membership fluctuated between 20-30, with a hardcore of about 15 players.

At the start of 2012 The Kings Stores closed for refurbishment and we were forced to relocate to The Distillers, near Smithfield market. This venue met with mixed reactions, as it was a bit too noisy and often cramped. We briefly returned to The Kings Stores when they re-opened, but unfortunately we were not able to stay there in the long-term.

Towards the end of 2012 we found a new home The Old Doctor Butler's Head pub, near Moorgate, had a large upstairs function room and friendly staff. We are occasionally kicked out into the smaller restaurant room, which was a bit cramped. But at the end on 2014 after a refurbishment the new management wanted between £14,000 and £15,000 a year to stay there so we had to move on.

In early 2015 after some extensive searching we found the Yard a restaurant in Shoreditch. It had a good sized area downstairs we can play in, a friendly staff and a good selection of Pizzas (although I would recommend the Meat & Cheese Board). As I write this we have only been there for a few months but so far its is going well and we are looking to rebuild our membership having lost a few through the moves over the last few years.

Sadddly the curse of refurbishment has struck again. In late 2016 the Yard was brought up and is going to be turned into a Mexican restaurant. Some quick searching found a number of venues near but the best fit was the Curtain Road Pizza Express again in Shoreditch. It has an area downstairs we can play in and again if you like Pizza it will work for you. As with every move we seam to have lost a few groups but with any luck we will be able to bebuild.

May 2019 found us looking around again for a better fit. We tired the Wahaca on Tabernacle Street. The keen eyed will notice this is the refurbished "Yard". Wahaca Shoreditch (on Tabernacle Street) It did not work out well and we found ourselves back at Curatin Road.

Well COVID19 had made face to face RPG and DoTH went into a forced hybernation. The search for a venue starts again as wella s building up our player based again. If you are intrested please message us, either on our face book page or on our Discord Server.